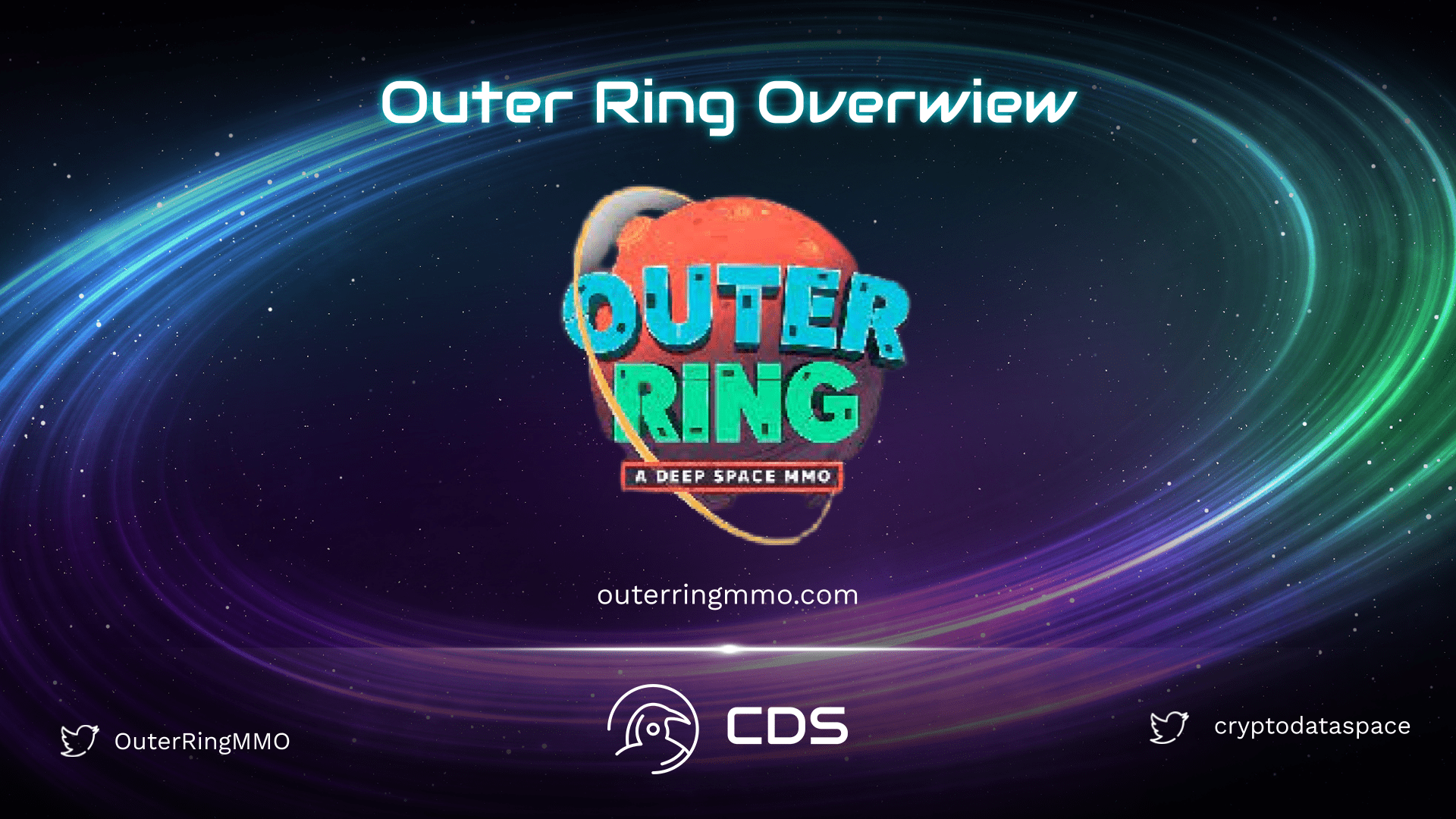 Building in public has always been a premise for Outer Ring´s team. Month after month, we publish detailed Development Updates covering all the progress made and showing future integrations. And thus receive feedback from you, the future players of this videogame. From now on, this kind of document will be divided into two:

Players will not need to interact with wallets to enjoy this immersive videogame full of adventures. It’s free to play and has no entry barriers. Anyone can create a character, grab a weapon, and start searching for awesome loot. We aim to attract a massive audience of MMORPG gamers and slowly introduce them to the benefits of Gamefi. Which many of you already know and support.

Dividing this report will allow us to offer segmented and personalized information to our audiences: those passionate about blockchain technology and those curious about game design. Providing more specific information on concrete topics. Also, those who just enjoy the technical and fun parts of the videogame won’t have to wait an entire month for this kind of content.

Out of all these new blockchain tools, we will explore together, one of the most valuable is the ability to involve players in the game’s decision-making. For example, helping write the lore of Outer Ring.

BUILDING A STORY WORTHY OF A LIVING UNIVERSE

Open world videogames need to be filled with narratives and meaning. With a common storytelling framework, players can develop their own adventures, choose multiple paths and create communities around a shared goal. These communities might form in the shape of clans or factions… or by creating rich characters that emerge from the backstory of the game universe.

Players will surely find something compelling in at least one of the five sentient species inhabiting the Outer Ring.

This past month, the narrative focused on the Scavengons.

“This civilization emerged from reclaiming, repurposing, and rebuilding older technologies instead of developing a process of scientific inquiry and industrialization of the resulting knowledge. Scavengons are roamers, explorers, and wanderers. Their civilization features little permanence and settlement. They have an intricate clan and tribal society with complex language, castes, customs, and social norms.”

*WIP from the Storytelling Team

This species’s complex features must be represented in all aspects of the videogame. In the character design, their game mechanics, movements, and storylines inside the game… And, of course, in their symbolism, starting from the banner.

We brought out a proposal and let our community make the decision. Selecting the new Scavengons banner.

The “Nomad” design came out as the clear winner. A skull-shaped piece with a compact and aggressive design perfectly represents the species’ toughness and strength.

This design has already been tested inside the graphic engine and looks fantastic.

Later, we will showcase some of its complementary uses and additional symbolic elements you might find inside the game.

We are anxious to watch these fearsome and complex creatures carry their banner into battle but first must call up our troops. The 5 species are getting ready for war. Soon, you will hear more about the Earthlings.

Next week, on our Discord channel, you can participate in the fan-art contest to help inspire the Earthlings´ symbol. Submit your best concept art and get the chance to win one Tier 5 Lootbox.

Our 3D modeling team has been quite busy with the re-work of our beloved characters. Earthlings and Scavengons have already been revealed, and you have even seen them in movement. But between creating a 3D digital model and animating it on software like 3DSmax, there is an indispensable step: Character rigging or skeleton animation.

Our rigger must define the range of action and movements of a 3D model character, living creature, or object. To do so, he must create a series of interconnected “bones” and “joints and attach “skin” to it.  Then, he must add movement patterns into the skeleton and create gestures while defining a balanced weight scale and kinematics to make the animation realistic inside the videogame.

Gear up. The armors in our MMORPG

Wars mark history. Fights between tribes, world wars, planetary invasions… The art of battle shifts through the centuries, but species evolve very slowly. Technology makes more dangerous weapons while our bodies stay the same. Armor has become our second skin, as vital, if not more so, as the firearms we carry into battle.

In the Outer Ring, warriors need to find resources, combat and craft their gear to be able to survive, or even find riches, in the unexplored parts of the galaxy. Earthlings, out of necessity, have been one of the first species to create complete sets of armors.

As they exploit this remote part of the universe, they find the need to prototype, design, and create better gear sets.

Rare resources cannot only be found in dangerous locations. To explore those places, you will need to get the finest equipment. If I were you, I would not fight a boss without having one medium-size armor. You might lose all your loot.

*Disclaimer: those of you who like to play the battle frenzy freak are welcome to go berserker mode.

Medium armors are the last stage of protection you can acquire before building your heavy armors. Prepare your materials. You will soon be able to craft them in our Dapp.

We all need a companion. Let’s talk about pets.

Previous DevUpdates have revealed the existence of the first kind of pet that will accompany you along your path through the Outer Ring. The design of bug-inspired species is almost completed. Still, they lack a relevant feature: a narrative inside our world.

There are a lot of creative minds in our community. Each day we receive multiple proposals to improve the project and ideas that inspire the game´s design:

Mettlmortl on Space vehicles´s uses:  “Will I be able to name my clan spaceship? And can I add tags and stickers on the outside? That would be cool.”

Coinmaster on the role of Clans: “We have the opportunity to build a world that is better in many ways than our current world where there is justice and freedom for all. I personally favor a cooperative means to that end, but it doesn’t mean I won’t fight to be free. I can see alliances between clans being very pivotal to a prosperous existence.”

And we have community members creating Backstories in our Discord server:

Bearing the name of Imdali, a nebula with many planets is the witness of wars and conflicts.

Eathlings, Va’ans, Oracles, Scavengons and Mechs often find themselves living together despite their great differences.

This is the story of Scavgar, a scavengon engineer and fighter.

Possessing, although peculiar to the species, extraordinary muscles, he was even more imposing and powerful than these congeners. Which made him one of the best fighters on his planet.

Scavgar was also obsessed with progress, much more than some Oracles, he already had his own ship, built by himself from an early age.

This innate gift for combat but specially for engineering was known to all, and many scavengons respected Scavgar for it….”This week, we will create our second Backstory Contest, where you will propose a name for this species and create lore for them. Our team will review them, selecting the best three names and stories. Then, using our Governance Platform, people will decide which name fits them best.

Nexxyo Labs is preparing for its own war, recruiting elite warriors from every corner of the Terra planet. This organization was created in the cold lands of Pamplona, a small but rich city in the country Earthlings call Spain. What started as a tiny revolutionary movement now has more than 100 soldiers involved in its cause. Some of their names are known and feared across the galaxy.

In this series of videos, you will discover the story behind the greatest warriors of Nexxyolabs and their ambitions inside the Outer Ring.

Let us introduce you to Josep Martinez. He owns the rank of “Lead Videogame Producer” inside the organization. A privileged mind capable of coordinating an entire army of talented developers, accompanied by a warm soul that puts a smile on all the people across the other side of his screen.

Videogames development is a constantly changing industry. Studios adapt the game design, art, graphics, and mechanics to the player’s demands and needs while creating revenue models that keep

their profits at their highest. Microtransactions or pay-to-win games are a result of this revenue-driven model. We intend to break it.

Web3 is all about community, and videogames are as well. Outer Ring will incorporate blockchain tech to create a user-centric model. Players will get complete control over the game´s economy, crafting, owning, and trading tokenized assets, while the studio generates fee revenue from the transactions.

This way, developers only need to focus on building a fun videogame that attracts and entertains a big community. They can forget about constructing complex commercial mechanics that end up exhausting players. If we do our part, creating a FUN videogame, trade will happen naturally. We know that, and we are putting all of our minds into making a real “game first” web3 MMORPG.

Our field of work is very innovative, and new ideas flourish daily. Changes, updates, and nerfs will happen. Yet, our vision is clear: We are creating an MMORPG where players get complete control over their adventure, empowering them through blockchain tech.

Are you interested in what blockchain can offer to the videogame industry?

Just want to enjoy a great game? Be welcomed as well. You won´t notice the technology you are using.

Welcome to Your New Home. See you soon on the Outer Ring.

Upland and The Meta Universe

Earn as You Walk with STEPN!