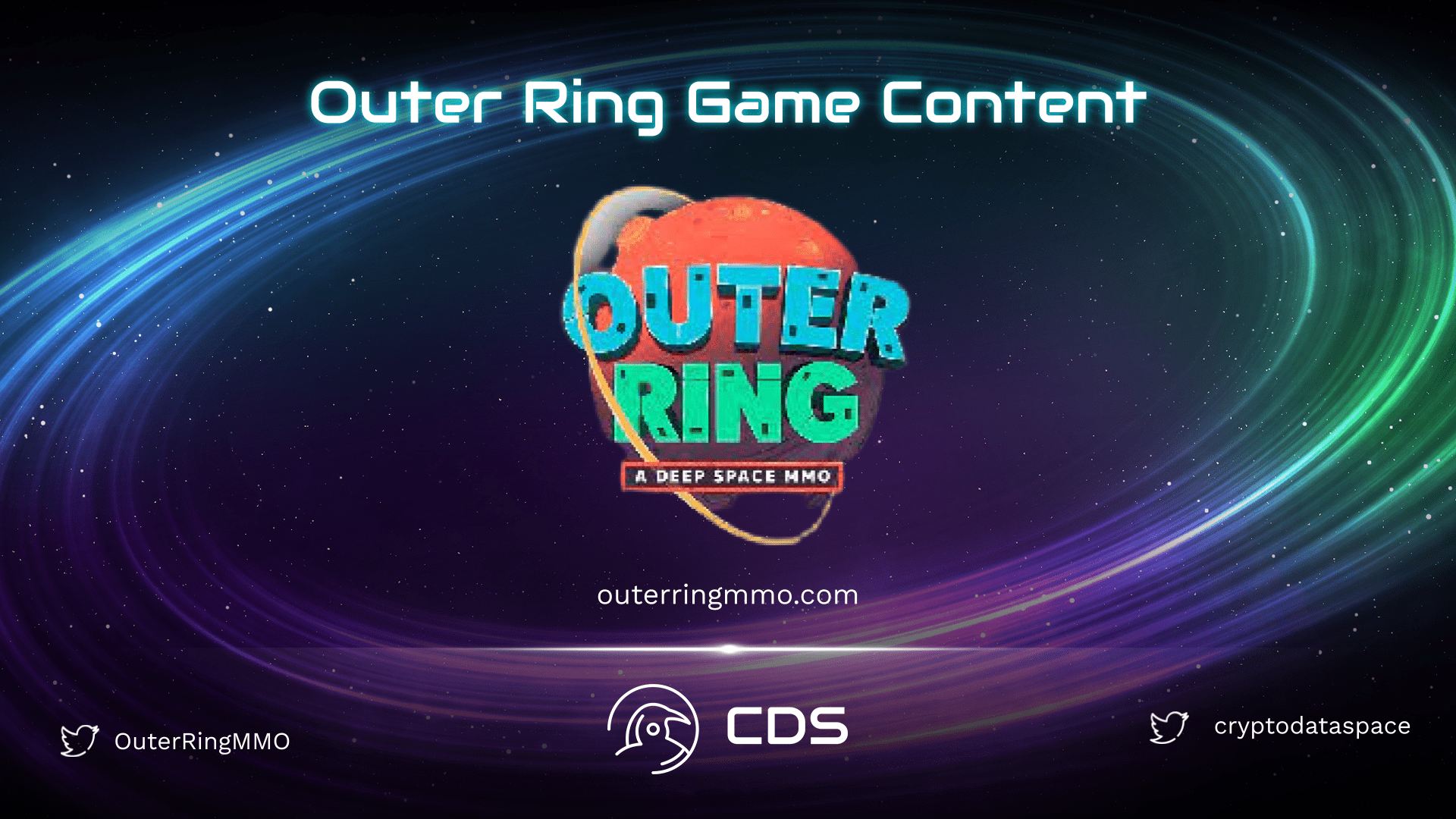 The Metaverse and the P2E Sector, which are very popular in the crypto and digital world today, adopt the idea of ‘Playing to Win ‘.

The Outer Ring has been in development for 3 years. At first it was thought of as a normal MMO, but it has been redesigned to allow blockchain integration.

Initially starting with a team of 6 people from Pamplona, the team has now grown into a multidisciplinary team of more than 103 people working from different parts of Europe.

Outer Ring is an MMORPG game built on the foundation of being able to earn money while playing online multiplayer games in virtual reality, the basics of which are currently integrated on the Binance Smart Chain (BSC) Network.

It is a game in partnership with Windex Technologies OÜ and Nexxyo Labs. It represents a unique investment opportunity with an experienced company developing the project and a team that carries its goals higher.

The game is still in development and currently has a demo version. The full version is expected to be launched to the market in 2023, as indicated in the roadmap.

In addition, the Outer Ring can create mini-games and interactive scenarios for special events or partnership integration while interacting with the Player-Oriented Economy.

More than a story in the game, the player is free to determine their own fate and decision mechanism. Character development in the Outer Ring is based on skills.

Other RPG games are based on classes or roles, such as fighters, shooters or wizards. In the game’s universe, you will choose one of 5 types and develop different skills to fulfill your role in your factions, clan or group of friends.

Players will have to work hard to master increasing skills such as running, jumping or climbing (Physical Skills). By practicing different tasks such as mining or crafting weapons and armor, you will create better NFTs.

Moreover, the same methodology applies to combat and piloting skills. The launch of the game is sequential based on milestones. This strategy allows for easy testing and continuous updating.

Outer Ring MMO is a combination of several genres. It is a third-person shooter game built as an MMORPG. But having a transparent and persistent world allows the implementation of other game modes.

PVP fighting will be both in the regular game and in indoor arenas, allowing eSports competitions to take place.

The Outer Ring is an ever-growing galaxy with a wide variety of planets and environments. All these different areas have unique characteristics that affect the playability of the game. In this universe in general there are planets, asteroids, dungeons and areas rated at different levels.

Their planet is populated by countless races and species. Each one is more bizarre and extravagant than the previous one. But only five people will determine the course of the recent history of the outer ring by their actions.

EARTHLIINGS : Stubborn, flexible and greedy. These are words that can perfectly sum up the temperament of the Earthling. Earthlings from Earth, who are only a few decades under the belt of space voyages, are constantly improvising and adapting in order to survive. Their story in the Outer Ring begins after a Nuclear Winter that renders the Earth uninhabitable and forces them to travel through space in search of a new home.

Now, Earthlings lead the Federation, an organization that hopes to bring stability to the universe and accept humans as the superior race.

VA’ANS: Inheritors but also cruel, the Va’ans are battle-hungry beings who devote their entire lives to hunting, fighting and killing. The Va’ans have dedicated their lives to Vassal, the Black Hole, whom they perceive as the God of Death. Perceiving death with a knife as a means of salvation, they hunt in space, saving creatures from the torment of life, offering them eternal rest in the void of Vassal.

The Va’ans ended up on the Outer Ring after the Vassal expanded and absorbed their solar system. Perceiving this as a call to action, the remaining Va’ans decided to sweep the field and spread the gift of sweet death.

ORACLES : The Oracles, the rightful rulers of the most powerful empire the universe has ever seen, are the proudest beings in the universe and the most blind to their achievements.

The Oracles, fragile mollusk-like creatures, had to design impenetrable exoskeletons to give them a chance of survival. But after the creation of their suits, they turned into godlike creatures capable of connecting to any device, absorbing and calculating information almost as fast as a computer.

Despite their emotional attachment to their empire, they are committed to cold, rational truths and obsessed with science and progress.

After their empire was torn apart by their own greed, the Oracles were forced to take refuge in the Outer Ring, where they hoped to rebuild their empire.

SCAVENGONS : Organized in a complex system of almost fifty castes, the Scavenges are considered the least developed creatures of the universe. Because their bodies produce fluids that can be turned into medicinal poultices, the Scavengons were hunted by Va’an warriors and forcibly removed from their home planet.

While most Scavengons are still space scavengers who collect reusable parts to build their own machines, a few unlucky ones, when they reached the Outer Ring, were infected by a parasite that controls their minds and actions.

Now, most Scavengons still lead a nomadic life, wandering through space, while the infected live under the command of the Parasite, a terrible military force that aims to spread the virus and take control of the organisms living on the Outer Ring.

MECHS : Mechs are a complex structure designed by Oracles and are currently the only completely artificial beings in the universe. Although they were originally designed for combat as the perfect weapon against infected Scavengons and battle-hungry Va’an, Mechs gained sensitivity and freed themselves from the ropes of their creators.

After the Mechs were freed, they dedicated their lives to finding the meaning of existence and building a brighter future for all the races of the universe.

Most Mechs are travelers traveling from one planet to another, some of them still in the Mech-Hub, the planet of the Mechs, where the entire history of the world is safely stored and collecting experience while under their protective gaze.

Everyone was waiting for the Outer Ring Civil War. The signs were visible. Chaos was brewing in the darkness of space. But the new inhabitants of the Outer Ring were reluctant to see the storm coming towards them, and by the time they saw it, it was too late.

Four different, but equally powerful forces took part in the battle. While the Coalition for Rebirth fought for change and the escape from old traditions, the Bastion of Traditions Alliance believed that tradition was the only means to end factional conflict. The Interplanetary Sovereign League fought for the expansion and Decimation of the Outer Ring. And there was only one group that stood in the way of the expansion of the war: the Multi-Planetary Pacification Coalition.